2021 Conference: Queer Conditions/Kuir Haller: Social and Political Change in an Age of Authoritarianism

Each year, the Keyman Modern Turkish Studies Program brings together scholars from around the world to discuss some of the most pressing issues facing Turkey from a global perspective. This year the conference’s 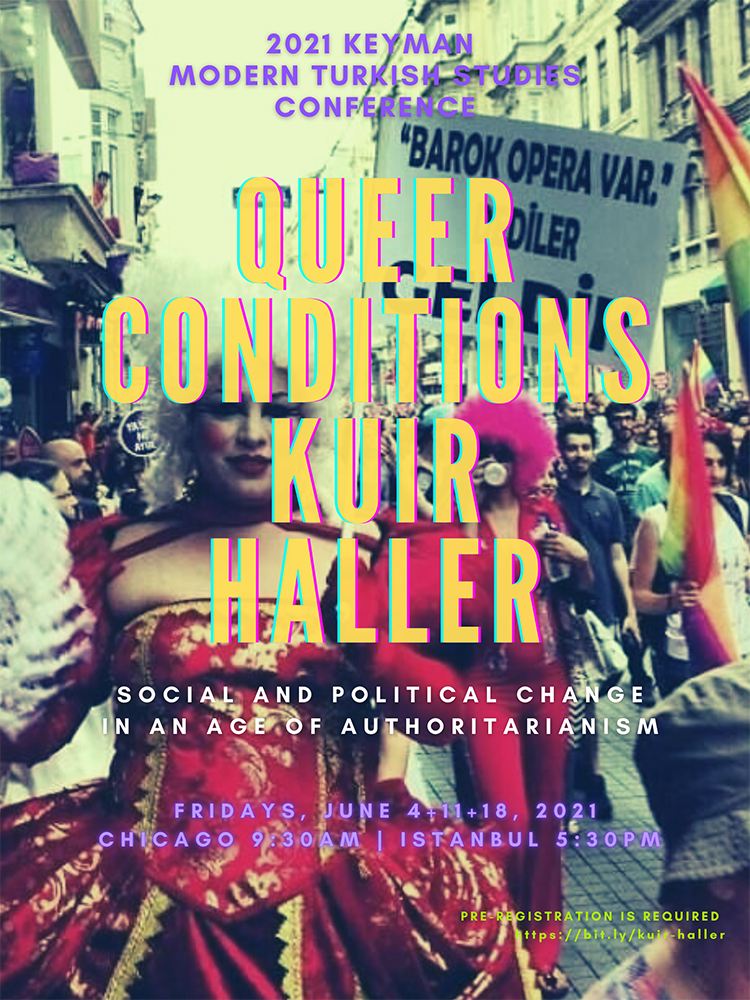 focus will be on Queer and Gender Studies.  The primary aim of the conference is to engage with the global debate taking place on intersectionality.  More specifically, we are interested in analyzing the role of gender identity and dynamics in facilitating the reproduction of power structures, and in the mobilization of historically marginalized groups seeking to expose, challenge, and ultimately dismantle those structures.   By examining emergent forms of these justice-seeking struggles, the conference this year will direct the scholarly gaze on shifting relationships and opportunities for political action in a deeply polarized Turkey.

Feminist scholars of modernity have repeatedly revealed the gendered assumptions that underwrite the abstract citizen as the building block of society. By “sexing” the supposedly unmarked subjects and unmasking their socio-political conditions, we can productively interrogate the normative assumptions of other individuating axes of difference such as race, ethnicity, class and geography. By historicizing patriarchal heteronormativity, we can start to undermine its dominance in our readings of the past and shape current narratives of power.

Some of the questions we seek to answer are:  What are the conditions facing queer, feminist and other sexed subjects in contemporary Turkey? How did Turkey get to its current state after the Gezi protests that showed arguably the most intersectional politics in action in the country’s recent history? How could attending to these queer conditions help us approach the study of Turkey anew? At a time of profound transformation, framed by graduated authoritarianism and shrinking freedoms in the country, how could sexing the study of Turkey enrich our understanding of its history and its present?

While the geographic focus will be on Turkey, we think of Turkey as a historical reference point, in geographically, culturally and ethnically flexible terms—and not Turkey as nation state with the attendant definition of Turkishness. We encourage further discussion with scholars who specialize in the study of Turkey’s contemporary diasporas and ethnic minorities, its broader Middle Eastern and Eastern European context, and other socially and politically cognate regions.

Please see our conference program for full details and schedule brief below.

Querying the Renaissance with the Ottomans | Abdulhamit Arvas, University of Pennsylvania

How is Queer Understood in Turkey? | İpek Şahinler, University of Texas at Austin

“Cemetery for the Unknown:” The Material Deathscape of Gender, Ethnic and Religious Margins in Turkey | Aslı Zengin, Rutgers University-New Brunswick

Can and Deviant Attachments: Sexuality, Faith, and Minority Belonging in Turkey | Ali Yıldırım, University of Minnesota

Disrupting the Public Order: On tactics of visibility and dispersal of LGBTI+ events in Istanbul | Zeynep Serinkaya, Koç University