It is estimated that about half of world's more than 30 million Kurds live in Turkey, where they have struggled for self-governance through parliamentarian politics and armed conflict for more than 30 years. The three-year peace talks between the Turkish State and the PKK (Partiya Karkerên Kurdistanê, the main armed group of the Kurds) were terminated in July 2015 by the Turkish state, leading to yet another cycle of violence. 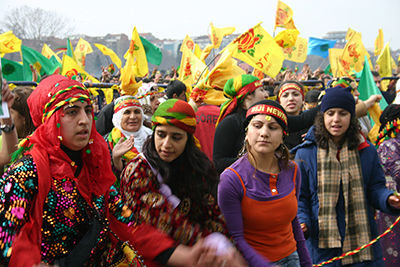 Hundreds of civilian casualties, thousands of displaced Kurds, and terrified Kurdish and Turkish societies thus joined the long history of violence and deprivation in Turkey.

This international conference brought together cutting-edge research examining the last hundred years of Kurdish existence in the Ottoman Empire and the Turkish Republic in a historical and comparative perspective.

2:30–4:15 PANEL I: Kurdish Formations and Transformations through History

Djene Bajalan, Missouri State University,
The Movement in the Provinces: Tribe and Nation in the Late Ottoman Period (1910-1914)

Cevat Dargın, Princeton University
United Kingdom and the Kurds during World War One: A Critical Analysis of British documentary sources: 1914-1920

Janet Klein, University of Akron
The Construction of Minorities in Kurdish-Ottoman Journals

Susan Benson-Sökmen, University of Toronto
"The Dream of Kurdistan is Buried Here": Re-reading Kurdish Nationalism as a Critique of the Nation-state

Nicholas Glastonbury, CUNY
Jumping off the Bandwagon: Towards a Local Epistemology of Kurdish Politics

8:45–10:30 PANEL III: Strategies of the Turkish State: violence and displacement

Zeynep Yokmaç, Boğaziçi University
Displacement and the Strategies of Sovereign Domination in the Kurdish Region in Turkey

Michael Ferguson, SOAS University of London
Kurds in the History of Displacement in İzmir

Nazan Üstündağ, Boğaziçi University
The Mother, the Politician and the Guerrilla: Figures Who Tell the Truth in the Kurdish Anti-Colonial Struggle

Haydar Darıcı, University of Michigan
From Stone Throwing Children to the Self-Defense Units: A Recent History of Kurdish Youth Politics in Kurdistan

Dilan Okçuoğlu Queen’s University
From the Geopolitics of Violence to Actors at the Borders: Rethinking the Kurdish Conflict at the Local Level

Kaya Akyıldız, Bahçeşehir University
A Memory of Their Own: An Exegesis on the Formation of Kurdish Political Memory in Contemporary Turkey

Hüseyin Raşit, Yale University
An Ethics of Violence Based on Practice: The Rojava Revolution